What do you do when..

You walk past a crabapple tree heavy with fruit that no one is picking and is falling to the ground to rot?

You pick every single crabapple you can reach from the branches hanging over the sidewalk (in our case that turned out to be 17lbs worth!!), and you turn them into.... 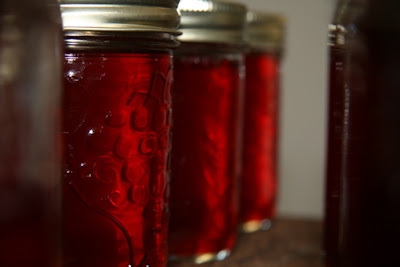 Best buddy and I used this recipe and proceeded to

Once we had the juice we boiled it up as per the recipe with the appropriate amount of sugar, jarred it, processed it and were done.

It's delicious and for my first go at jelly making I'm really happy it all set. It's a little too hard set for me (I prefer jelly a little syrupy - this is like jello set). So next time I make it I think I'll boil it for less time.

Got a tree that you think is an edible apple but not sure? Cut the fruit along the equator and look for the 5 seed star formation.
Posted by Rachel at 10:41 AM 3 comments:

It's a deodorant miracle! 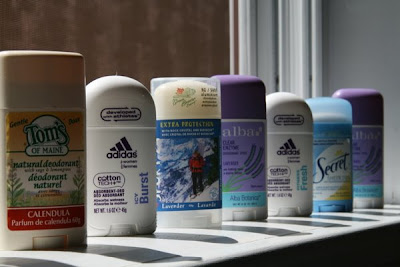 Yes! This is really about deodorant!!

Ok, confession time. I sweat a lot. I know! Too much information! Wait! There's more!

Until recently, I'd tried and failed with just about every conventional deodorant/antiperspirant under the sun. After giving up on antiperspirant a few years ago (never stopped the sweating and left nasty greasy pit marks on my clothes, also aluminum=bad 4 u), I switched to deodorant. I tried all the ones you see in the pic (yes those were all in my medicine cabinet).

Not only did I continue to sweat a lot, it was like whatever scent was in the deodorant (natural or otherwise) somehow turned into the stinkiest of stinks under my pits. It's as if the deodorant was helping my body manufacture stink!

The deodorant that came closest to working was the adidas one you see in the pic. Its the only commercial deodorant on the market for women (and by "commercial" I mean loaded with stuff in the ingredients list you can't pronounce). But even still I'd have to wear an undershirt and often reapply and or even resort to wadding toilet paper into the pits of my clothes to soak up the sweat and the stink.

And then about a month ago, I read a post on Crunchy Chicken's blog. Turns out she is a big time sweater as well! Not only that, she'd found something that worked! What she had found was the deodorant stone. Now I'm not such a fan of this because I tried wiping that slimy stone under my pits in high school when I was working at the health food store and learning how to be all crunchy and granola-y, and it didn't do a darn thing for me. Also some of the comments on Crunchy's blog, from those I highly respect, said that that there was still aluminum in those stones (I know, the companies say its safe but I'm skeptical).

But anyhow, I was still totally psyched for her Crunchiness and was excited with the hope that there might actually be something that works for me.

So I tried something that many of my blogging heros are already doing.

And let me tell ya, this shit works.

Not only do I not stink anymore (for days I was constantly asking hubby to smell my pits), I seem to sweat a lot less. Like a LOT less. Maybe even,
Posted by Rachel at 8:41 PM 3 comments:

I love my neighbourhood

Yeah, it has a bit of a bad reputation (mostly unfounded) but one thing's for sure....nothing goes to waste in this 'hood.

Anything that we haven't been able to freecycle and have put to the curb (and that isn't actual garbage) is almost always gone before the garbage trucks even arrive. And our deck reno was no exception.

I've mentioned the deck reno before and how replacing our falling down, rotting, mushrooms growing out of deck was a bummer as it's screwed our chances of making any reductions in the consumer goods category of the Riot for Austerity. But I was also really stressed about how much waste would be produced. This stress was not eased when I saw the mountain of wood stacked in the back yard after the deck was demo'd.

So I was really happy when one of my neighbours (who I hadn't met before - mental note - I have to work on this), walked up and said he'd take all that old wood. He said his buddy would re-use what he could (apparently a lot of the frame was still in reasonable shape), and he'd use the rest as firewood at his cottage.

As a result there was very little garbage produced by our deck reno.*

*confession - I did sort through the builder's trash and removed all the items that could be recycled. It's a compulsion.
Posted by Rachel at 8:42 PM No comments:

Its a long weekend here so I thought I'd make myself a breakfast treat. 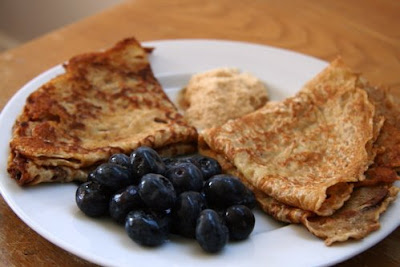 This is the pretty but deconstructed version. For true deliciousness you need to unfold the crepe, sprinkle in that maple sugar (from Springdale Farm), add some blueberries (from Ferme la Rosée), roll it up and sprinkle some more maple sugar on top. Then eat ensuring that each bite has a bit of crepe, sugar and blueberry.

150g spelt flour (whole grain - I wasn't sure that would work but it really did!)
300ml milk
1 egg
(plus lots of butter for the frying pan)

-mix all ingredients together (the batter will be v. runny)
-add a ladle full to a v. hot frying pan and swirl around until you have a thin even coating of batter at the bottom of the pan).
-wait a few minutes, flip, wait a minute or so, and its done.
Posted by Rachel at 12:42 PM 3 comments:

Me in a nutshell

This blog documents my experiments in regards to living an efficient life.
I'm Rioting for Austerity, clearing out the excess, and discovering the things that really matter to me.

Producing the desired result with the least waste

My Consumption (compared to the Canadian Averages)